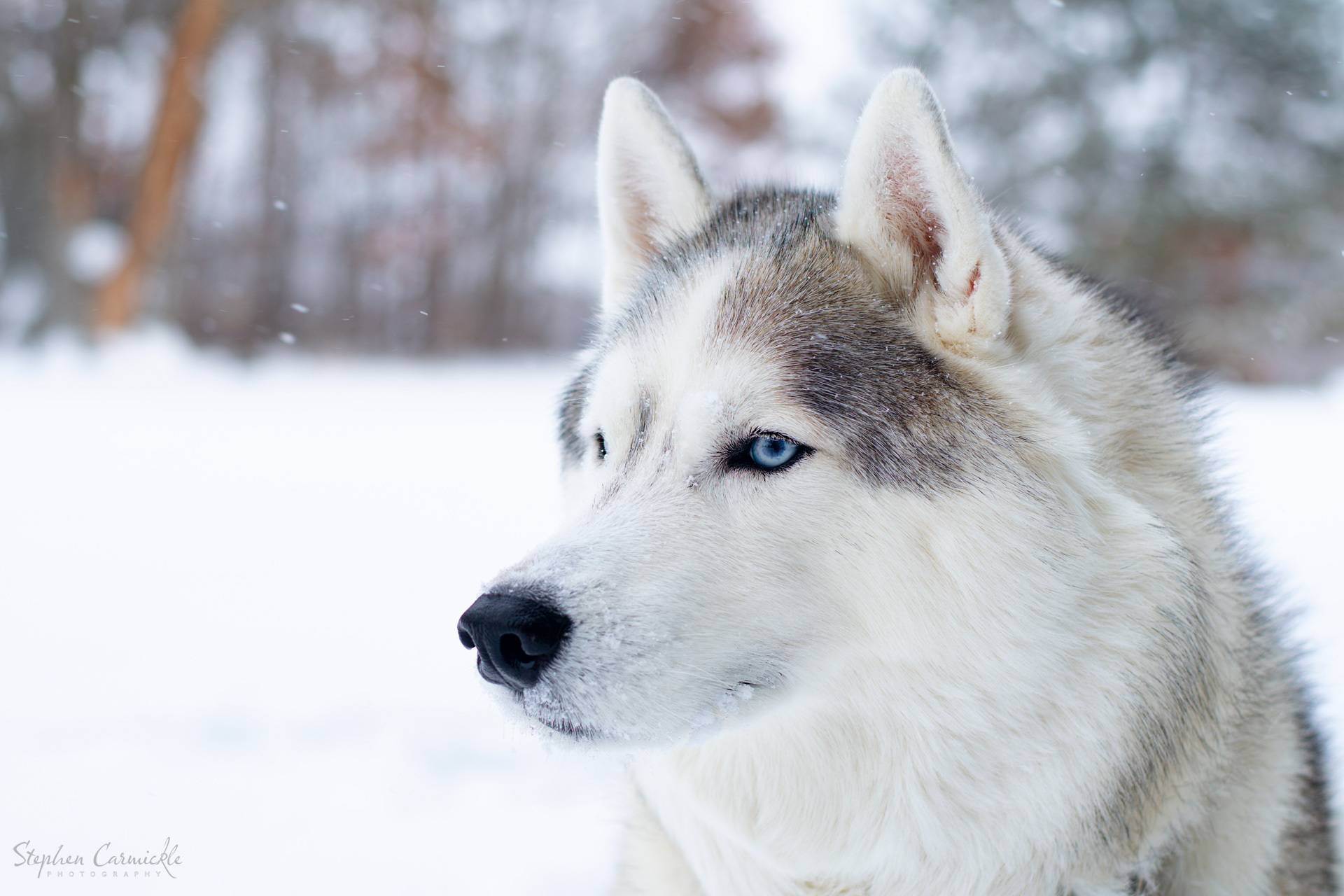 Cosmo was born on August 23rd, 2010 and was the runt of the litter. I got him when he was about 8 weeks old and he cried the whole way home, then all night too since he had to be kept in a cage to keep him safe…from himself. He cried every single night for at least a week. As a puppy he was incredibly playful and loved to bite with his extremely sharp chompers ☺️. Just look at this monster!

He is actually a very well behaved dog. I hear a lot of stories about Huskies chewing drywall and destroying furniture. Cosmo has never done any of that, and can be confidently left alone knowing he’ll be a good boy!

Unfortunately his puppy photos and some of his other photos are not the greatest. Luckily the quality of the photo does not degrade his cuteness. In 2021 I really want to get some great photos of him.

He has always been a very difficult dog to photograph, even as a puppy. Honestly, just a difficult dog in general but that is what I love the most about him! He does what he wants, when he wants and it cracks me up. But occasionally he will cooperate for a photo…

Unfortunately I sucked at taking pictures back then. But just look at that Christmas pupperoni! I loved the rings around his eyes with the brown patch so much. They faded away as he grew up, it was such a cool marking. 💜

Sadly I could not find the file for his last puppy photo so I took a picture on my iPhone. At least I have it framed!

I used to build igloos for him but haven’t in a long time. I think it is time to build him another igloo since there is a bunch of snow right now! This was later that winter, puppies grow so fast! I wish they would stay puppies longer.

It makes me so happy to see him running around! He loooves to run. Finally a decent photo too! 😋

High five is his favorite move. I think he is left-pawed, he uses his left paw for all of his important tasks. Like holding his dish in place, knocking all the food out of his dish, placing a paw on your leg to get your attention. When we are playing he performs a really great wrestling move where he locks his left paw over my arm. So I think his left paw is his dominant paw. I don’t know if that is uncommon or not like it is with humans, but I find it interesting.

Mush! Cosmo satisfying his inner husky instincts with me on a skateboard behind him. He’s actually not much of a puller, especially not anymore as he’s getting older.
Good times.

2013 you can see his rings around his eyes starting to fade. I didn’t even realize dog’s fur patterns changed over time, I thought he would have them forever.

Winter is obviously Cosmo’s favorite season. I actually feel bad for him in summer, he doesn’t like going outside as much in summer. But in winter he is in his element!

Cosmo loves being underneath, on top of, or inside anything he can. In this case he his in/under some trees! But he will try to fit anywhere! If you want constant entertainment, get a husky! They are not for the impatient, however. On that note, Cosmo actually taught me to be more patient and I am super grateful for that. 🤗 🥰 You’re the best Cosmo!

😂 😂 😂 🔥 – I don’t understand how he can be comfortable in some of the positions I have caught him in. He used to lay on the back of the couch with his legs hanging over the side. He’d fall asleep with his head against a wall at a 90 degree angle. Lately he prefers a life of comfort, opting more for chairs, beds, and pillows. But I have no idea how he fit in this fire pit, lol! What a goof.

By 2014 the rings around his eyes and the tan color have mostly left his face. ☹️

You might notice he has not one, but two cable tie-outs attached to his collar. This is because he was frequently escaping with just one on. Still have no idea how he was doing it to this day, even with two on I’d notice one cable just lying on the ground somehow. One time in winter, it was snowing very heavily and the roads were bad, cars were driving very slowly on the main roads. He escaped without me knowing at all, until I received a call from my friend saying my dog was going up to cars at an intersection and howling at people 😂. I’m just glad he was ok and didn’t get hit by a car, I think the poor road conditions helped in this regard. But I also cannot believe my friend just so happened to be at that intersection at the exact same time. Who knows what could have happened if he’d been running through cars any longer! 🙀

Unfortunately there is a gap in Cosmo photos from 2016-2018. But Cosmo photos are coming back better than ever in 2021!

Thanks for being my friend for so long, Cosmo! 💜💜💜

Might be a part 2 of this blog later in the year when I’ve accumulated more Cosmo pictures!