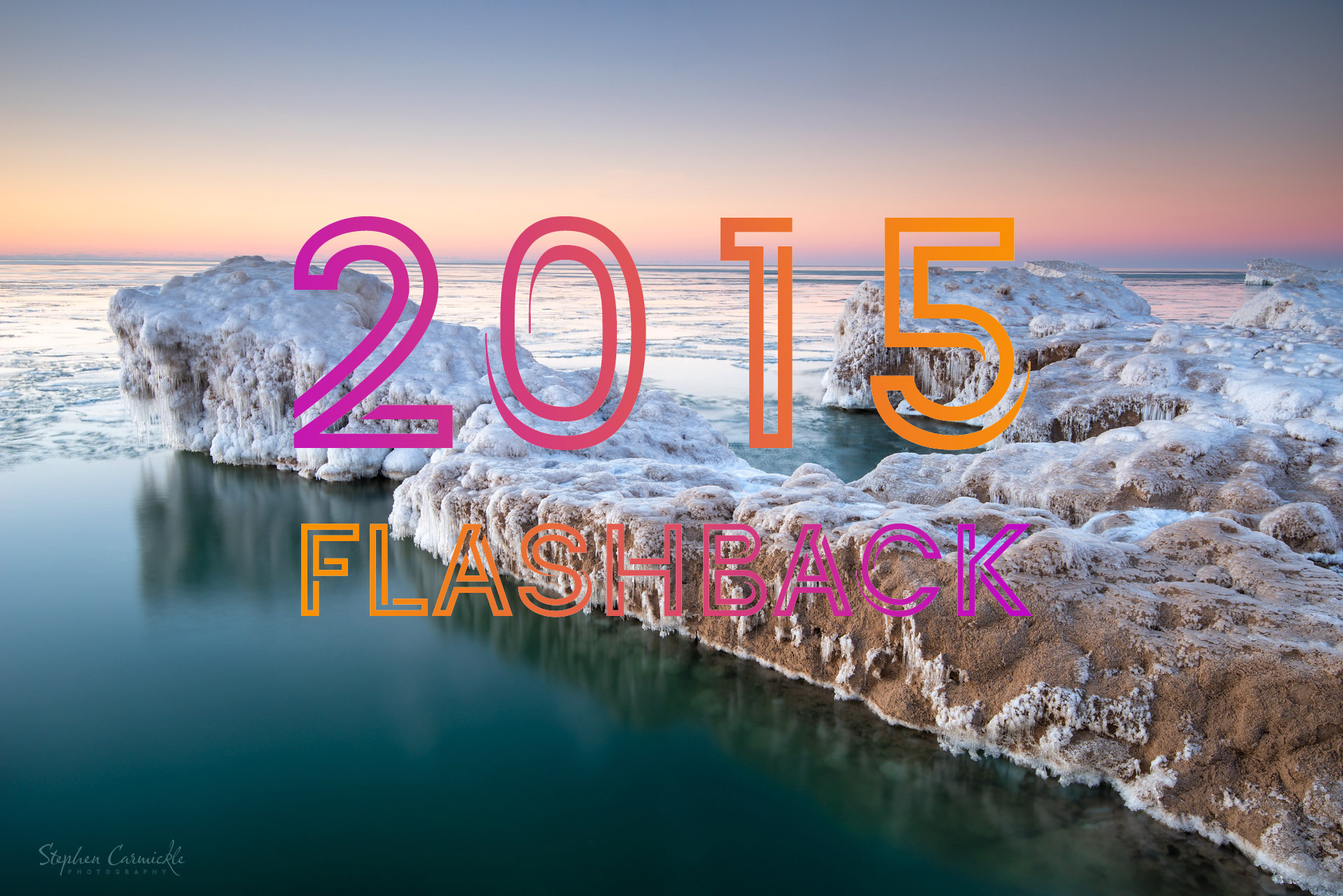 First I want to say that walking out onto the ice shelf is dangerous. Snow can cover unseen holes in the ice that drop through to the freezing cold water beneath. If you fall in to one of these holes, the current will suck you under the shelf with little chance of making it back out. I was not aware of this when I first went out onto the ice shelf and if I were to photograph the ice shelf again, I would try to do it from the solid ground of a lighthouse pier.

Opening the driver’s side door, a chilly breeze invites itself inside sending a shiver down Steve’s spine. It seemed more like a threat than the warm welcome one longs for when dreaming of sandy beaches, but that’s to be expected in the middle of winter on The Great Lakes. He laced up his boots and gathered his gear, preparing as he always does when photographing the beautiful shorelines and lighthouses of Lake Michigan. As he crested the snowy barricade surrounding the freshly plowed parking lot, the sight that awaited him was not that of a sandy beach, but an icy alien landscape stretching as far as the eye could see.

As the ice crunched beneath his feet, Steve couldn’t help but think to himself, this must be what it felt like when Neil Armstrong first set foot on the moon. The thought humbled him, but being mentioned among some of the greats wasn’t a burden he was ready to bare. Caution fueled each step as he ventured further out onto the ice shelf, slipping and stumbling along the way. The ice howled and cracked all around him, doing nothing to help gain his trust in the unfamiliar landscape. With no water yet in sight, one could only guess what lies beyond the rising ice peaks looming in the distance. The shelves jutted out what must have been a couple hundred feet from the would-be shore, but turning around it looked like a mile back from whence he came. Upon reaching the frozen brink, the moment of truth had finally come, Steve peered over the edge to a scene most magical. Beautiful ice formations lined the length of the shelf’s edge, each one reaching out like glacial fingers toward the fading golden horizon…………

2014 and 2015 were exceptional years for ice shelf formations on Lake Michigan. While I haven’t tracked it every year, I do not think an ice shelf has formed this extensively since then. I’d guess this is probably due to the abnormally mild winters Michigan has been experiencing the last handful of years. The ice shelves on Lake Michigan are one of the most stunning things I have seen in Michigan, I imagine only the Northern Lights would top it for me but I haven’t seen the Northern Lights in person yet. This leads me to why I wanted to make this blog post in the first place. From my experience, when I see people viewing these photos at art shows or wherever, it doesn’t get the reaction I personally expected it would. I’m not sure if it’s because the photos don’t do the scale justice or if it’s just so unusual it’s hard to compare to anything else. These ice shelves are massive and otherworldly, it looks like a sight you’d see in the Arctic but on a smaller scale. Outside of frigid polar territories, I wouldn’t be surprised if the Great Lakes are the only other place in the world you could see something like this. If there is somewhere else, let me know!

I wish so very badly I could go back in time and have a second chance at this, 6 years later I would do a much better job. Nonetheless these are still some of my favorite photos I have ever taken and one of the coolest things I’ve ever seen. Between the inherent danger and rising winter temperatures I’m not sure I’ll ever get a chance to shoot the ice shelves like this again. Looking back at everything I question some of the settings I used, the focus is off in certain spots, and the composition is sometimes questionable. This was back when I used graduated neutral density filters to balance the bright light of the sky with the lower light of foreground, something I no longer do. Now I would blend multiple exposures using luminosity masks in photoshop. When I do landscape/waterscape images I try to recreate the scene as I am seeing it with my own eyes. In harsh contrasting light conditions, our eyes are more capable of seeing the whole spectrum of shadows and highlights than our cameras are, so using something like GND filters or blending multiple exposures are how you can make your camera see what your eyes see. I’ve found blending luminosity masks has more potential for accurately depicting the natural lighting, opposed to using GND filters, which can also negatively impact the color of your image.