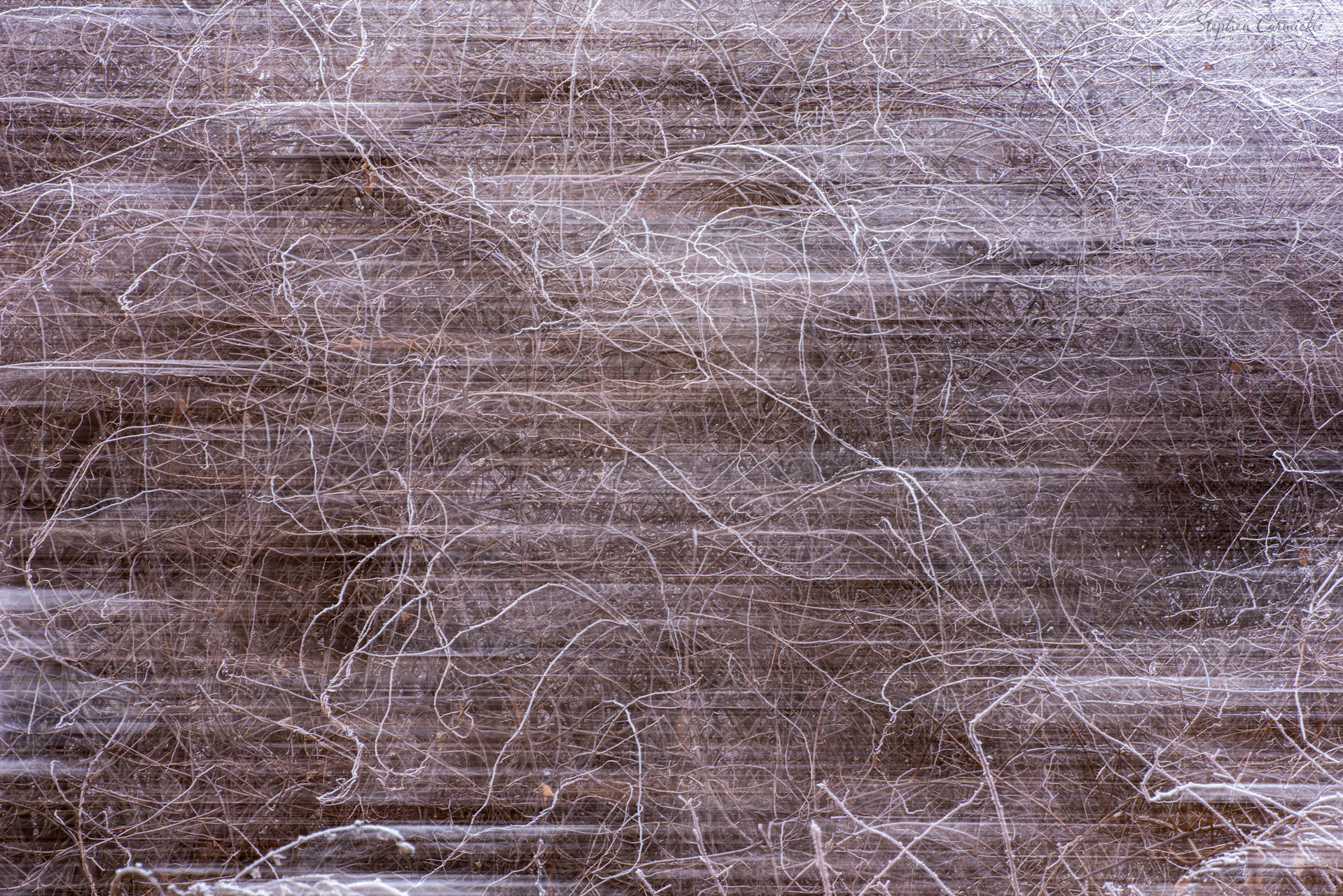 I believe taking your camera with you during your everyday routine or to a local “mundane” location is a great exercise for staying sharp with your photography skills. I don’t always get the greatest photos doing this, but I always have a lot of fun when I do. This forces me to think creatively and continue to hone my understanding of the camera’s technical settings. But there is beauty to be had in all places, if you are able to find it, even if it’s right down your street. Every day I take my dog for a walk, there are a couple different routes we take, this time we decided to go around the pond. Upon arriving an unusual frost could be seen clinging to the trees in the area. The frost was completely isolated to the area immediately surrounding the pond, this is what I found to be so unusual. I don’t know why the frost only appeared in this specific location and nowhere else along the walk. The best explanation I could come up with is that the pond was the source of some early morning fog and the lingering moisture froze to the nearby trees. I did not have my camera with me at this point, so I hurried back home to grab it before the frost melted away.

As I began to survey my surroundings, I noticed some crunching underneath my feet. Though my attention was initially on the trees, beneath me were intricate ice formations creeping through the grass. All of these shots were taken using my Nikkor 105mm macro lens so I was able to be pretty flexible with the types of photos I made. The versatility of a macro lens grants the user the ability to go from a scenic shot to a close-up of ice on the ground without having to change lenses. Quite a valuable ability if you ask me. I was very drawn in by these ice formations, I don’t think I made a photo to do them justice, but the patterns were almost mesmerizing.

Honestly, I think I could have done better with a lot of these photos, but I’m going to blame that on being flustered after some lady called the cops on me while I was walking around taking pictures. I don’t know if it is the way I look or what but I’ve had the cops called on me several times while taking photos, people often think my camera is a gun 🤷‍♂️. I am very curious if this happens to anyone else? But anyways, the police officer asked me what was going on and everything was fine, back to making some photographs. When I was walking my dog earlier, what really caught my attention was the frost that was creating sharp lines against the darkness of the branches. Once again, didn’t turn out as cool in-camera as it did when I was looking at it with my own eyes, perhaps another lens could have captured it in a manner that better suited my vision? But I still like it.

My two personal favorite types of photography: Abstract photography and nature photography, any time I can combine them I will. One of the easiest ways to add some abstract flare is by zooming or panning the camera with a long exposure. I panned the camera while affixed to a tripod, adding more chaos to an already chaotic scene. The photo below was taken with a 2 second shutter. For the first second (approximately) of the exposure I let the camera sit still and record the branches on the sensor. For the second half of the exposure I slowly panned the camera creating the horizontal blur.

The versatility of the macro lens bares its teeth once more, I go right from shooting a harmonious mess of branches to the tiniest of twigs along a thorny vine. I spent the most time with this one, I had a lot of pictures to go through and I learned something while sorting through them: I wish I hadn’t taken so many pictures. I had so many that I ended up spending over an hour just going through them trying to decide which composition I liked, which had the best focus, and every other tiny detail my anxiety ridden brain could conjure. Ultimately it’s better to have more options than not though, even if it is tedious to deal with.

Red tends to stand out very well in nature, whether it be in a lush green forest or among the dead grays of winter. These berries were hard to miss, other clusters of berries were used to create interest in the dead space of the background.

Now to my favorite photo I made this session and it has nothing to do with the frost that brought me here in the first place. In fact, I could have taken this photo years ago! I’ve walked by this sewer thing countless times and never thought to photograph it. I’m assuming it is the source of the water for this artificial pond? It would be really cool with some colorful clouds overhead as the sun is rising or setting. <—- future photo idea. I wasn’t even going to bother at first, but sometimes you never know how a photo will turn out until you try it, and I was quite pleased with the results. The first couple shots were just the metal cage on top but as I looked down into the hole, the reflection was so much more fascinating to me. There were a lot of ways I could get creative in this instance. Framing the shrubbery in a metal square, blurring the foreground instead of the background, which angle to have the squares appear in the frame, how many squares to place in the foreground. I didn’t want to have the squares “perfectly” aligned vertically and horizontally with the frame of the image, it seemed too organized and I think this is more interesting. But that just leaves more options for the future should I bring my camera back here again.

So that was my day spent at an artificial pond where dogs are designated to poop near a sewer thing. Walk down the street and take some photos of your own! Show them to me by tagging me on Twitter or Instagram and I will respond!